Join us on January 21st for our next Insight-2-Inspire Speaker Series, hosted in partnership with WISEatlantic. Gain insight from three inspiring scientists as they share their experiences navigating a career in science and the importance of mentorship in Canada’s science community. 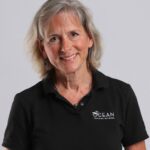 Dr. Sara Iverson is a professor of Biology at Dalhousie University and the Scientific Director of the global Ocean Tracking Network (OTN). She is also affiliate faculty at the University of Alaska Fairbanks. Sara received her BSc in zoology from Duke University and her PhD in physiological ecology, working jointly with the Smithsonian Institution’s Department of Zoological Research and the University of Maryland. She held postdoctoral fellowships at Georgetown University and the Canadian Institute of Fisheries Technology, Technical University of Nova Scotia. Sara began her faculty career at Dalhousie in 1994 as a NSERC (Natural Sciences and Engineering Research Council, Canada) Women’s Faculty Awardee. She leads an interdisciplinary research program in physiological ecology that has advanced the use of tools ranging from biochemical tracers to energetic measurements to tracking studies to better understand the biology and life history strategies of marine vertebrates (primarily marine mammals, polar bears and seabirds) and the food webs within which they function.

Sara has co-led OTN from its inception (2008), which is now the world’s foremost aquatic animal tracking network and a Canadian National Research Facility. OTN is an international aquatic research, data management and partnership platform that uses sensor technologies, robotic underwater vehicles and “animal oceanographers” to provide state-of-the-art capacities in ocean observation and knowledge on aquatic animal movements, migration, habitat use, interactions and survival, in the face of changing global environments in order to advance the governance and sustainability of the ocean’s biological resources.

Sara has supervised and co-supervised more than 60 graduate students and postdoctoral fellows and has published over 155 peer-reviewed papers. She is a former NSERC EWR Steacie Fellow, Killam Prize Awardee, University Research Professor, and is a Fellow of the Royal Society of Canada, Academy of Science. 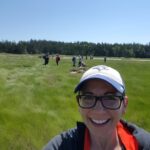 Jen is a first-generation university graduate, originally from Annapolis Royal, NS. Her first mentors, three amazing female high school STEM teachers, allowed her to realize her potential to head to university and complete her BSc in Marine Biology at Dalhousie University — where she has stayed ever since. Completing her PhD in Earth Sciences (studying salt marshes) was a test in resilience and perseverance — having children, teaching many university courses, supervising honours students, and working two other part time jobs — Jen finally cracked the glass ceiling and graduated in 2018. If it weren’t for some extremely supportive mentors, she would have given up years before ever finishing that thesis. She currently teaches courses at Dalhousie University related to marine biology, zoology, and paleontology, and is the director of the summer field program called SEASIDE. Jen is known for her enthusiasm, compassion, and patience, and is always available to help students in whatever they need support with- academically, professionally, or emotionally. 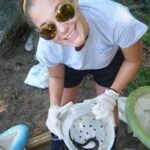 Gwyn Mason, hailing from Bridgewater, NS, has always been passionate about the ocean and the creatures that live in it. At the age of 8, she had decided that she wanted to be a marine biologist, and, with a few deviations in that interest along the way, she became one. Gwyn did her undergraduate degree at Dalhousie University in Halifax, NS, receiving her B.Sc. Hon. in Marine Biology Co-op in 2013. She then went to graduate school at Memorial University of Newfoundland in St. John’s, NL, where her research focused on identifying rapid evolution in an introduced Atlantic salmon population experimentally and genomically. Gwyn’s adventures then took her west to Vancouver, BC, where she is currently the Sablefish Coordinator in the Pacific Region’s Fisheries Management group with Fisheries and Oceans Canada (DFO). Gwyn’s responsibilities include day-to-day management of Sablefish and other groundfish species, participating in regional and national scientific and management meetings, and liaising with external stakeholder groups, including industry, recreational fisheries, Indigenous groups and ENGOs. When she’s not at work, you can usually find Gwyn playing rugby, exploring the west coast or drinking her bodyweight in tea.