DEPARTMENT OF FISHERIES AND OCEANS 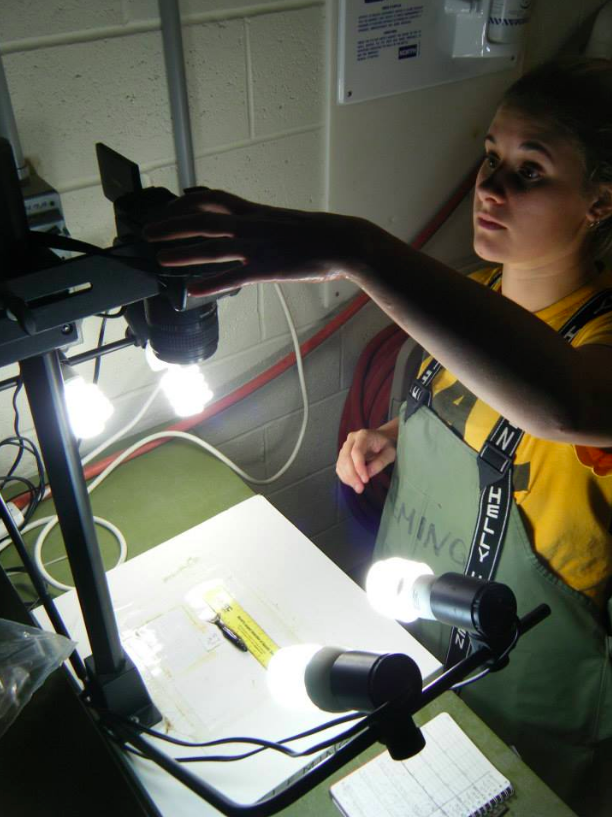 Q: When did you realize you had a talent for marine biology?

I’ve wanted to be a Marine Biologist for almost as long as I can remember. I think it all started with a school project when I was in Grade 2 – we had to do a presentation on one of our favourite animals. I chose to do mine on Polar Bears, and when I learned that their populations were threatened, 8-year-old me decided I wanted to save them. While I may not be working with polar bears in my career at the moment, the spirit of studying and managing aquatic and marine species in the face of a rapidly changing climate remains!

Q: As a kid, were there any formative experiences that helped to shape your path?

Other than the elementary school project I mentioned in the question above, I think it was a lot of little things that pointed me in the direction of Marine Biology. I grew up close to the ocean and loved it; my father is a naval architect (boat design) and my mother’s a science teacher (a former Techsploration teacher too) – we sometimes joke that because of their careers I had no choice but to become a Marine Biologist — it’s the perfect blend of the two! I’ve always been fascinated by the ocean and the creatures living in it, it’s so cool!

Q: At what point did you realize your chosen career path was for you?

While throughout my childhood, I gravitated to marine biology, I think the cliché moment of clarity for me was during my first co-op term the summer after my 2nd year of my undergrad. I was a research technician with the Bluenose Coastal Action Foundation, based in Lunenburg, Nova Scotia. I primarily worked on two projects involving the American eel (Anguilla rostrata). The first project was an elver (young eel) abundance study that has been ongoing for quite some time: we would conduct daily counts and weekly size estimates of migrating young eels into freshwater environments. The other project was an adult habitat preference study, where we set traps in different habitat types in a freshwater environment that was relatively untouched by humans. Twice a week, we would check the traps and if an eel was caught, we would ID tag it, which would allow us to track its movements over time. That whole summer was mainly spent doing fieldwork, and while the days were long and conditions could be less than fantastic, it was then when I said to myself “Yep, this is what I want to do”.

Q: Was your experience at Techsploration what you expected it to be? How did it impact your career choice or chosen career path?

My experience with Techsploration is a bit different from others, because I never was actually a “techsplorer”. When the program came to my school in 2004 (I was in grade 8), my mother was a team teacher for it. I was involved in so many sports and clubs that when I was in grade 9, I just didn’t have the time to join. However, my mother continued to run Techsploration in our school until she retired from teaching (and passed the baton), and she now works for Techsploration (Techsploration’s Alumnae Outreach Coordinator)! I was brought on as a mentor during my final years of my undergrad and grad school. I’d participate in school visits and the annual conference at St. Mary’s University, usually bringing a small touch tank and some souvenirs from my co-op positions and research projects with me. It’s awesome being then able to share my passion with young women and to see them get interested and curious in it too!

Q: Do you have any role models within your career field?

There are lots of people whom I look up to and strive to emulate who work in the realm of marine biology! When I was a kid, Steve Irwin was an idol of mine. When I was in university, I had several profs who did the coolest research! Dr. Sara Iverson (Dalhousie University) was at the time, conducting seal and walrus research and Dr. Jen Frail-Gauthier (Dalhousie University) – who was simultaneously completing her PhD, teaching lab sections, organizing and teaching summer field courses, writing a textbook(!), and raising two kids. The girl is a super human! I also really admire the late Rob Stewart, who dedicated his life to educating others on the importance of the oceans, the amazing wildlife that lives in them, and the responsibility we have as humans to respect and protect these environments (seriously, if you haven’t watched Sharkwater, Sharkwater 2 or Revolution, you need to). Lastly, I’m inspired every day by my friends and colleagues in this field – everyone does such cool work, from genetic and genomic population structures of scallops to examining the effects of interbreeding between wild and escaped captive salmon, to living on beaches in Costa Rica to study and protect sea turtle nests.

Q: What would you say to people – especially women – who might be considering a career in your field?

The oceans are a fascinating environment, and they’re so critical to life on Earth. Everything that happens in the ocean is a precursor to what will eventually happen on land. The human population has gotten so large, and the industrial revolution plasticized so much of what we encounter in our daily lives – and it’s only just in the last decade or so that the major issues of marine plastic pollution, over-fishing and habitat destruction have really come to the forefront of our daily lives. There is so much work to be done in so many different areas of marine research – and young, new, and innovative minds are some of the best! My advice is to get curious: ask questions, watch videos (Blue Planet), volunteer for your local aquarium or beach clean-ups, and talk to people who are passionate about the same things. You’d be surprised by how many of the opportunities that I’ve had have come from casual conversations in completely unrelated settings. If Marine Biology is your thing, and that’s what you want to do – start putting in the work now at school. Take the science and math classes and do your best in them. Explore what post-secondary schools are offering in terms of programs, and then look at what the prerequisites are for the 1st and 2nd-year courses. It’s hard work getting to where you want to be, but it’s all worth it!

Q: What’s one fun fact about you (i.e. your favourite hobby, a significant achievement, etc.)?

It’s certainly not a secret to anyone who knows me, but I play rugby! I started playing at 20 years old (it’s never too late to start!) in Nova Scotia, then played in Newfoundland for a year, and now I’m a starter for the Div 1 Meraloma women’s team in Vancouver, BC!